This article was first published in SSAR News, June 2013.

What’s your favourite colour? If you’re a Search & Rescue member and it’s orange, you’re in luck. Unfortunately, Rebecca Basset is not such a person. Orange is definitely not a favoured colour but it’s growing on her and since joining SSAR in September 2011 her wardrobe colours have expanded. 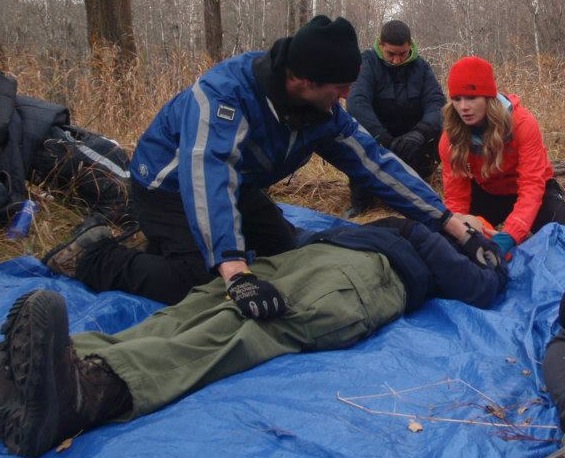 Rebecca is the owner of Everyday First Aid Training. Rather than simply providing certification courses she targets first aid instruction to specific purposes. For example, it’s most important for new moms to learn baby CPR and information on child-specific injuries and ailments.

Her first aid interest and expertise guided Rebecca to become involved in Search and Rescue when she was living in Lac La Biche, Alberta. She was looking for a volunteer opportunity that she felt had purpose and joined Little Divide Search and Rescue for a year before moving to Saskatoon with her husband Jeremy and children Bailey (6) and Morgan (5).

With no previous outdoor experience, Rebecca was surprised to learn that she really likes being outdoors, camping and going on adventures. On last year’s frigid January winter campout with SSAR she was excited when her first attempt at building a shelter out of willow branches and a tarp turned into a comfy sleeping spot. It was also a confidence builder for other SAR activities – although she says her navigation skills need a little work.

Being a Search and Rescue team in Saskatchewan means we don’t get as many calls as our counterparts in B.C. or Alberta. So when a training day last year suddenly turned into a “real” search at the request of the Saskatoon Police Service, Rebecca and her team sheepishly had to phone back to the Command Post to admit they’d forgotten to take a radio, they didn’t pick up the near-water search gear they were supposed to have, and they had to borrow equipment from another team. Will the Search Managers ever let her forget this? 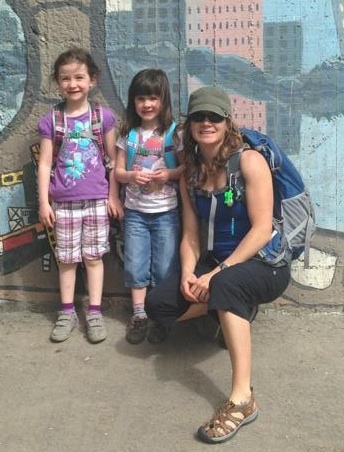 Bailey, Morgan, Rebecca and their backpacks.

In addition to being a Team Leader, Rebecca is SSAR’s resident First Aid Instructor and helps build realistic and relevant first aid scenarios into each training day. Rebecca has also served on the SSAR Executive for two years, first as Membership Director and now as Treasurer.

SSAR is something that Rebecca says, “It’s mine. It’s something for me.” But she’s also passing on knowledge to her girls (they carry their own backpacks and a bit of gear on every outing) and instilling them with confidence and an appreciation of the outdoors.

Amongst friends, Rebecca is known as the “mother” and the “organizer.” Keeping in touch with people, even through changes in residence or work, is important to her. She also “spends way too much time in the kitchen” and SSAR members have benefited from this on occasion with yummy healthy snacks at our meetings. And although she’s “a white girl with no ear for a tune” and her singing engagements have thus far been limited to her shower, she might be able to teach you a ’90s rap song or two if you ask nicely.