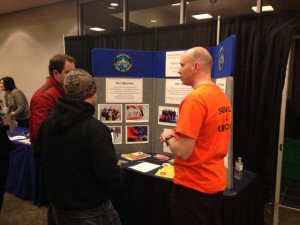 Jarod Harvey, Membership Director, talking to people at our display at the Banff Mountain Film Festival show in Saskatoon.

On Monday, January 13, 2014, the Banff Mountain Film Festival World Tour came to Saskatoon for the 21st year in a row! Over 1,500 people attended and the vast majority are people who are active in the outdoors.

It was a perfect location for Saskatoon Search and Rescue to have a display to promote safe wilderness travel via the AdventureSmart program and to recruit new members. A lot of people stopped by to chat and to learn more about us and what we do.

Thanks to the Alpine Club of Canada – Saskatchewan Section for hosting the event and inviting us to take part. Thanks to SSAR members Jarod Harvey (Membership Director) and Shelley Ballard-McKinlay (Communications Director) for staffing the display.