A Day of Bike SAR

The morning came early on Saturday, especially for those of us who were out until midnight the night before on the search activation looking for missing Austin Carter. But there was so much excitement at the training centre that nobody seemed tired. 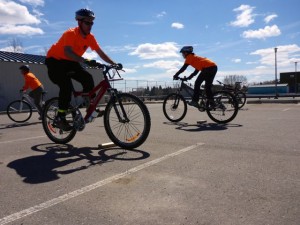 Drills in the parking lot.

The morning started with the typically dreaded classroom portion of any training day. Luckily, our presenter and fellow SAR member, Kent Orosz, kept this part succinct and well organized. We covered the basic theory behind bike SAR: that it is similar to regular ground SAR activities except that you move three or four times faster – which is huge. This makes biking a great method for containment and hasty searches. Also, mountain bikes don’t have the same limits regarding where they can go as a standard vehicle.

After the classroom session we moved into the adjoining room and started learning about bike and helmet fit. Three people had brand new bikes that morning. Apparently (note to self) a Bike SAR course is a great excuse to buy new gear.

From the training centre we biked in formation to a nearby school parking lot to practice some basic skills that our instructors (Saskatoon Police Service Constables Pura and Ong) started us out on. We learned how to rapidly brake without flying over our handlebars or losing control; we learned how to make tight turns; and then practiced going over obstacles. With that we were set. We reconvened after lunch at the Mendel Art Gallery. 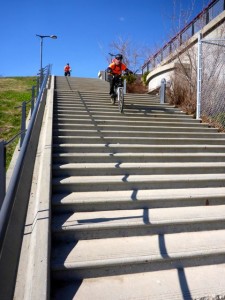 The foolish (or brave?) on the big stairs.

The afternoon started off with an easy ride to Pest Hill (for those of you who don’t know, that’s the big one by Circle Drive and Spadina). We started out on the side of the hill, doing some easy repeats up and down to get used to the technique of keeping our weight far back on the bike. Then the optional run all the way up the hill – which everyone chose to do ’cause we’re like that.

After the hill we did some trail riding along the river. It went well for the most part, minus the odd branch getting in the way. On the return leg we had the option of taking an advanced trail or the paved path. Only four of us brave (or perhaps foolish) souls took the technical one. It was lots of fun and I only almost fell into a tree a couple of times.

Some bike repair/maintenance was next up. I learned how to repair a chain, which seems handy – and is the perfect excuse to buy a chain repair tool. (Notice a trend here?) An easy ride down to River Landing for a photo opportunity was up next. We attempted, and did a decent job of, a “shoulder lock.” While there, a couple foolish (I’m not even saying brave anymore) people, myself included, decided to bike down the stairs.

The day ended with some bike limbo. Which, those of us who were there will know, has absolutely nothing to do with SAR but was fun anyhow. It doesn’t require you to lean backwards, just to get as low as you can possibly get to pass under a string. 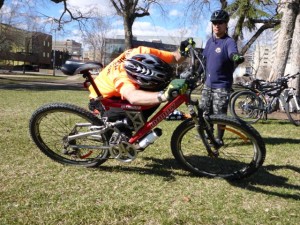 I believe Bike SAR will be a valuable addition for our team. However, it means there is even more stuff to keep prepared and ready to go on a moment’s notice for the next activation. Oh well, such is the life of an unpaid professional on Saskatoon’s SAR team.

To see more photos from the Bike SAR training, see the album on Facebook.